Hoping you have a great year! Harvey was horrible, but brought a lot of families and friends closer together.

Here we are. Just 24 days till Christmas. If your looking for that last minute unique gift, look no further. Call me for details about your own personal blog? Even your own personalized domain name with your own email address. I provide dependable and reliable hosting services with fanatical customer service. No contracts and my personal service to insure your blogging in no time. Call today!

I truly hope you had a wonderful 2014! But more so, I hope your new year surpasses all the things that went wrong last year and that the new year will bring health and good times to you. Happy New Year!

New estimates by eMarketer indicate that while growth continues to rise at Twitter, just 16.4 million US adults, or 9% of the adult Internet population used Twitter at least monthly in 2010.

“Twitter has continued to gain traction but at more moderate levels than we had expected,” Verna said. “Our updated figures put Twitter usage in a clearer perspective than published data showing hundreds of millions of Twitter accounts, or site traffic stats that include visitors who browse public tweets on Twitter.com but don’t actually use the microblogging service.”

I believe it important to note that eMarketer’s forecast represents a downward revision of its prediction made in April 2010.

Are you running out of time for that one last gift? Looking for a unique gift for that person that is difficult to buy for? Have you consider giving that person a personal blog?

A great gift that keeps giving all year long, every year. Give that person his or her own personal blog. Complete with personal domain name, personal email accounts and control panel to manage the look and feel of your blog. Excellent gift to keep up with news of that child away at college, friends across the country, and keep families up to date on family news.

As a Christmas Special the setup fee is just $39.95 and $130.00 a year. That includes the registration fee for your personal domain  name, unlimited email accounts, web mail access, and hosting of your blog site on state of the art web servers for one year. Renewable each year.

Have a Merry Christmas from 13th Floor Network 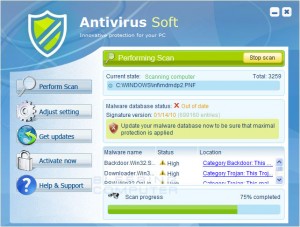 Antivirus Soft is a rogue anti-spyware and ransomware program from the same family as Antivirus Live. These infections are installed on to your computer through the use of malware that installs the program onto your computer without your permission or knowledge. It is also common for this rogue to be installed on your computer through the use of malicious PDF files that exploit known vulnerabilities in older versions of Adobe Reader. Once installed, Antivirus Soft will be configured to start automatically when Windows starts. Once running it will scan your computer and display numerous infections, but will state it will not remove them until you purchase the program. In reality, the infected files it detects are all fake and do not actually exist on your computer.

This program also uses aggressive techniques to protect itself from being removed by anti-malware programs. When the Antivirus Soft process is running it will close almost any running program while falsely stating that they are infected. Antivirus Soft will also change the Proxy settings in Internet Explorer so that you cannot browse to any web site other than the site for Antivirus Soft so that you can purchase the program. It does this so that you cannot browse the web to find removal guides or download software that will help you remove the infection. Using these two methods, the program essentially ransoms the normal use of your computer until you purchase the program or use the guide below to remove the infection.

While Antivirus Soft is running you will also see numerous security warnings and alerts that try to trick you into thinking that you have a security problem on your computer. An example of one of the alerts you will see is a fake Windows Security Center that looks exactly like the legitimate one, but instead suggests that you purchase Antivirus Soft to protect your computer. The infection will also show numerous alerts that state that your computer is infected, that you are sending personal data to a remote location, or a that your computer is being attacked. One of the alerts will have this text:

Just like the fake scan results, these security alerts are all fake and are just being shown to trick you into purchasing the program.

Without a doubt, Antivirus Soft was created solely to try and scam you into thinking that your computer is infected in the hopes that you will then purchase it. It goes without saying that you should not purchase this program, and if you already have, please contact your credit card company and dispute the charges stating the program is a scam.

Finally, if you have this infection I can help you get rid of it. Just give me a call or email.

I setup, develop and host all types of websites. The most popular thing on the web now is a Blog. I can setup your very own blog website so you can tell your family and friends what you are doing. They can makes comments too, if you like. Below is a short list of what I offer. If you don’t see it and it pertains to websites and computers, I can do it, just let me know what you need.

The 13th Floor Network now offers WordPress hosting accounts. Get you very own blog now! Ask me how!

It is time for a new face lift for the 13th Floor Network web site. Please excuse the mess as I make changes and improvments to the look and feel of this web site.